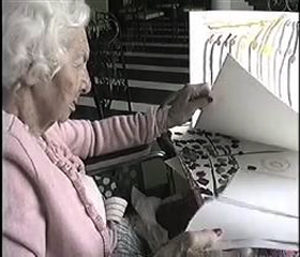 For four years Hilgos, an artist with Alzheimer’s, and Jenny Gräf Sheppard worked together to paint, draw, move and write. In the process they investigated ways in which the self could be tapped through creative activity. Gräf’s MFA thesis drew from this interaction and resulted in shows (with Hilgos) in Chicago and New York. These installations paired Hilgos’ visual work and spoken language to form a profound, hermetic context of mutually created meaning. Reacting to themes within the the artist’s work (themes of boundaries, containers, touching time and of shifting topographies of self during Alzheimer’s) Gräf created work that sat along-side Hilgos’.

J:”Hilgos, you know we are going to have a show together, right?”

J:”What should we call it?”

The show Accessible: Seating Place drew from their 3-year long creative friendship. Gräf built two plexiglass tables. One contained rear projected images of Hilgos’ hands tracing various objects. The second table held glass vessels onto which transcriptions of conversations between the two artists were inscribed. Inside the vessels were piezo speakers that played a sound piece of objects inside of vessels. Each piece of media was triggered when a viewer took a seat so that seats themselves become containers, and the audience contained. On the wall of the gallery there was a single channel monitor that explored the themes: Still in Action, Touch Time, and Hilograph.

Ongoing work:
Jenny Gräf Sheppard assisted Berna Huebner in founding The Hilgos Foundation which awards scholarships to young artists for intergenerational creative collaborations at The School of the Art Institute of Chicago. In 2010 Hilgos’ story and Gräf’s work with her became the starting point for a look at the relationship between creative activity and health in those with Alzheimer’s. This became the subject of the film I Remember Better When I Paint, a documentary with contributions in research and film by Gräf. Gräf also wrote a chapter in the book of the same title, I Remember Better When I Paint: Opening Doors, Making New Connections.