Performed in 2008 at High Zero Festival, Baltimore and in 2010 at the Fresh Produce Festival, DC

Threshold for Action and Sound, 2008:
Threshold is self-perpetuating system for sound and action in a social space. Ordering food from a menu triggers specific sounds which, in turn impacts the way in which food is served as well as the sound score. Also involved is a “manager” who directs the servers to behave in various ways based on hand gestures. The result is a dining event in which restaurant conventions are subverted, customers are not placated and consumer/ producer distinctions become blurred. 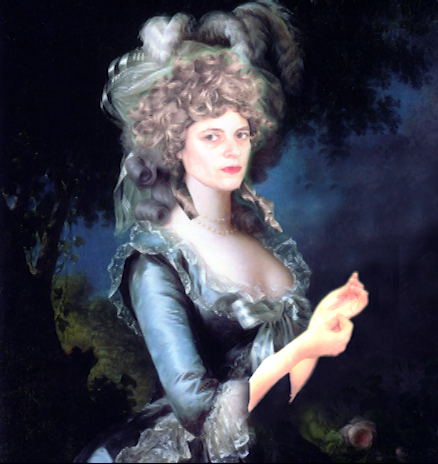 This piece transforms the audience into creators and the creators into audience. All are involved in the live production of a sound score to which the High Zero musicians respond. Building the piece together, the audience and performers are co-dependent in this improvised composition of sound and activity. The audience orders a from a food menu which sets a series of sounds, actions/behaviors by servers and light. A moving, animated painting depicting the artist as Marie Antoinette is hung at one end of the room. Her subtle hand gestures hint at the fact that this grand event may be orchestrated.

The environment created offers a confusion of the social roles of artist, audience, performer, servant or actor within the narrative of events.