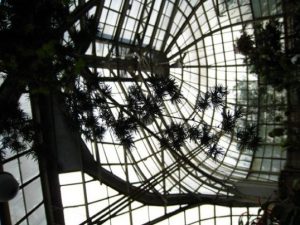 Commissioned in 2008 by Experimental Sound Studio, Osmosymbiotic Echo was composed for the Florasonic sound installation series (in conjunction with the Outer Ear Festival of Chicago) in the Fern Room of the Lincoln Park Conservatory. Based on native bird song and wing beat pattern, this sound piece uses sounds typically inaudible to humans – sounds in the ultrasonic range that affect plants, insects and other birds in a variety of ways. In addition to actual bird recordings, synthesized sounds based on birdcalls and wing beat patterns were also used. Although we recognize a symbiosis among birds, plants, and insects in an environment, humans cannot always perceive the causes of this give and take.
Review link