J.Gräf and M.V. Carbon produce electronically manipulated, tape processed sounds and vocals. Central to their music is the subversion of structural and melodic expectation. Since 1996, they have performed throughout the U.S. and Europe and have numerous releases on labels such as Load, 5rc, Hanson and Veglia. They have also collaborated with musicians such as John Wiese, Evan Parker, Spencer C. Yeh, Carlos Giffoni, Smegma.

Operating under the guidance of the singular creativeness of esteemed avant-navigators MV Carbon and Jenny Graf Sheppard, Metalux are undoubtedly responsible for some of the most distinctly unusual and enthralling preternatural experimental music of the past decade. Ever since banding together in the late 90′s, the duo’s numerous recorded and live works have rendered a suitable explanation of all the encompasses their vanguard productions almost unfeasible; the at-once disjointedly colliding yet ingeniously intersecting torrents of homemade electronics, tape delay, blaring riffs relayed via both guitar and synth, and subsonic rhythms are all masterfully rendered into a peculiarly riveting design which only Carbon and Sheppard seem to hold the secret to. —- Obsolete Units

Experimental electro-acoustic duo (J. Gräf and Chiara Giovando) uses voice, Tranoe, violin, contact mics and percussion to move between genres such as American murder ballad, Noise, and raw sound for psychoacoustic sound forms. Since 2005 they have produced two LP’s on the Ehse label out of Baltimore. 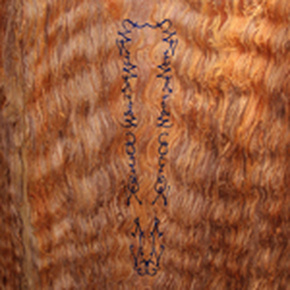 “Further proof of Baltimore bad-assness can be found no further than an amazing LP by Harrius (Ehse). Harrius is a duo of Metalux’ Jenny Graf and the we-need-to-hear-more-from Chiara Giovando. Anyone who spun the cassette wheels off that CarlyPtak/Chiara Giovando Heresee tape from a couple years back should start the party NOW, as Chiara astounds here with a fine balance of slow, unfolding sound-dadaistix and palpable energy-microphone-allure. Jenny Graf is an excellent partner in this work which has marks of Metalux motion-magic strangeness but with a sparser spatial vibe.” —Byron Coley and Thurston Moore

J. GRÄF + M. BASSETT  – Peradam
Utech Records, 2010
“This three-track monster–out on the impeccably curated Utech Records–is out to hijack that space between the ears and hold it for ransom. Opener “Zero as Sky” sounds like the final, frantically disorienting 17 minutes of life before death by swarming bees. “Black Waters Glow” eases up a bit with a dip into just plain eerie folk, a romantic interlude for a date with dark forces by two women who don’t fear Satan. Closer “Phantasmagorical Mapping,” though, plunges you right back into the abyss, 15 minutes of falling deep into a humid, pitch black well you know you’re never getting out of.” – Bret McCabe, Baltimore City Paper

Bride of No No

Bride of No No was a theatrical noise rock quartet formed in spring 1999. BONN also performed in floor-length, burka-inspired shrouds that left only their eyes visible. Atavistic issued the debut Bride of No No release in early 2001. B.O.N.N. Apetit!‘s discordant anti-melodies and claustrophobic vibe were a critical success, and the band performed at the Los Angeles installment of the artist-curated All Tomorrow’s Parties music festival (where Sonic Youth was host).